We were very happy to receive an invitation to the soft opening of the new Ruhstaller tasting room last week.  They only opened their doors Thursday through Saturday, and there was not a lot of signage to direct us, with only a stencil of Ruhstaller’s cigar-chomping “Jimmy” logo to let us know we had the right building.  Once inside the underground facility, which is dubbed The Swiss Rifle Club in a nod to Jimmy Ruhstaller’s personal history, we got in line for beers.  The tasting room is sectioned off into two separate areas – the bar area, which is dominated by a large communal table, and a more living room-like lounge area.  There is a lot of Ruhstaller-related memorabilia both new and old in the décor, including a large display of their trademark burlap-wrapped bottles.  When we visited, they were not pouring the entire Ruhstaller selection, but rather were informally test-marketing several varieties of a house red ale called Swiss Rifle Club, as well as a Belgian-y saison and a brown ale.  Unfortunately, we could not find any information about when the tasting room will be open to the public, but the Friday night soft open was very well attended. 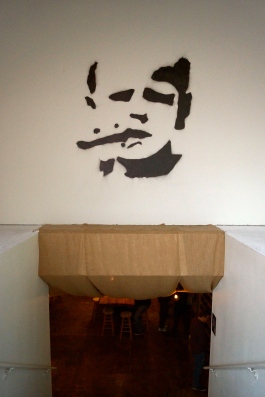 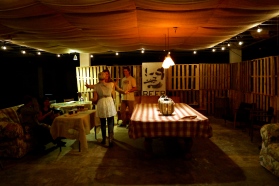 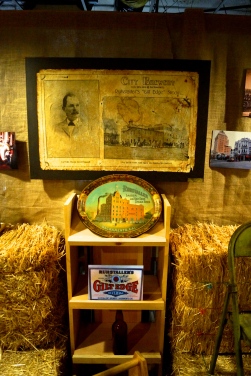 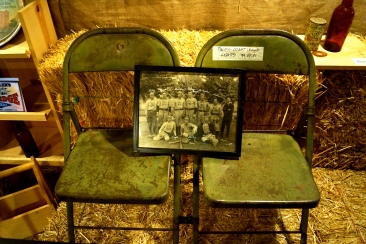 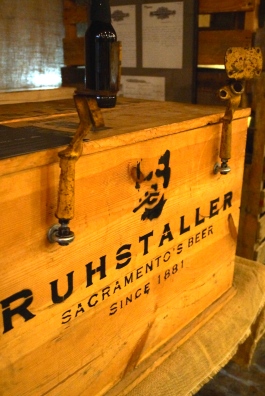 This blackberry-aged Berliner Weisse from Charlotte-based NoDa Brewing pours a clear, light gold with a filmy, bright white head.  The Rare Beer Club notes suggested aging Tart Attack for a maximum of 6 to 7 months, and this bottle fit right within that timeframe.  It offered a berry patch nose of blackberries, strawberries, blueberries, and a little mineral water, with some white wine grapes and honeydew melon on the periphery.  There is a succulent tartness on the first swallow dominated by berries and other fruits, including green apple and cantaloupe, but it finishes clean and crisp, without a significant amount of mouth pucker.  Some dusty funk asserts its presence on the nose and tongue, and a lemon-like tartness appears on the finish, giving Tart Attack the feel of a North Carolina terroir brew.

This plainly named hoppy dark ale from beloved San Diego brewers Green Flash pours an espresso bean dark brown-black with a mid-sized and slowly fading tan-colored head.  The expected Black IPA aromas of leafy hops and burnt toast are present, but the supporting smells favor dark fruits and berries over the usual coffee-like roast.  Green Flash Black IPA offers an excellent mix of fresh hops and scorched grains on the first swallow, with a bitterness that is reminiscent of coffee without necessarily matching its flavor profile.  Fresh and assertive hop bittering helps to offset the chalkiness that can sometimes creep into black IPAs, and fans of the style should appreciate this beer, even if the flavors are a little overstated.

We spent our 2013 holidays visiting Darcey’s parents in Chesterfield, Virginia, just outside of Richmond, and we also made a short side trip to Washington, D.C.  Naturally, we scheduled as much of our visit as we could around DC and RVA breweries and brewpubs, and yet we were left with the impression that we barely scratched the surface of these exciting beer scenes.

The first brewery that we hit was Isley Brewing Company, coincidentally also one of the newest to the Richmond scene, having opened just a few months before our visit.  They were also kind enough to give us a tour of their small but highly sophisticated brewing operation. The brewers at Isley told us they were brewing only a few different styles to start out (although their website shows they’ve added an IPA to the rotation since last December), and then creating variations on those styles by infusing them with various adjunct ingredients.  We had a hard time deciding whether we preferred the clean flavors of their The Bribe oatmeal porter or the peanut butter-infused version known as Choosy Mother.

From there, it was on to Hardywood Park Craft Brewery, which we were lucky enough to visit on the day of the Illumination festival, an annual solstice celebration that features a lot of their rare and barrel-aged beers.  Hardywood is another relative newcomer to the Richmond scene, but their warehouse-sized tasting room/brewing space is genuinely awe-inspiring, more on the scale of something like Green Flash than a mere microbrewery.  Their beers are also extremely unique and ambitious, including Bourbon Cru, a barrel-aged quad, and a bourbon barrel-aged version of their justifiably famous GBS (Gingerbread Stout), but even their relatively simple, Belgian-inspired Singel was tremendous.

We moved on to DC the next day, and practically bee-lined over to the famed Churchkey bar, where we met up with a couple of our Sacramento beer buddies who were also visiting Virginia for the holidays.  The entire group tore through the sizable beer list via a litany of tasters, including our first-ever samples of beers from Great Lakes, 3 Stars, DC Brau, and XBeeriment.  However, the undisputed champ of the night was the cinnamon-spiked Abraxas from Perennial, a legendary Imperial Stout that deserves every ounce of its reputation.

The next night, we went to a D.C. beer bar called The Black Squirrel, where we ordered a couple of rounds of tasters.  It was another mixed bag of styles, including an Almond Porter from 21stAmendment and a Union Craft gose, but the highlight of the night was undoubtedly the Tasmanian IPA from St. Louis-based brewery Schlafly.  For all of the rare breweries and styles that we tried, though, we were just as thrilled to sample East Coast stalwarts that we can’t get here, such as Yuengling Lager or Brooklyn Brown Ale, in our hotel bar.  Other stops along the way offered opportunities to sample exotic-to-us East Coast beers, like the Troegs Hopback we found in the café at the Smithsonian, or the Victory DirtWolf six-pack we scored at an area CVS.

Back in Richmond, a day spent sightseeing through the city was capped off with a trip to Legend Brewing, the oldest operating microbrewery in central Virginia.  Legend opened in 1994, and as such they are rooted in the standard beer styles that every brewpub offered back then (lager, porter, stout, repeat), but they are also expanding the roster with their Urban Legend series.  We sampled most of their offerings, all of them quite good, but the easy winner was the Bourbon Barrel Golden IPA, which offered notes of butterscotch, pineapple, and hard alcohol.

Our last night in Virginia was spent at Richmond’s Mekong Café, where a delicious menu of Vietnamese cuisine is augmented with an absolutely bonkers beer list of local favorites and world beaters.  This gave us an opportunity to recommend the Schlafly Tasmanian IPA to all of the hopheads in our group, and we were able to sample more Virginia offerings like Center of the Universe’s White Russian-inspired El Duderino milk stout, and Strangeways’ sublimely malty Belgian-style brown ale Woodbooger.

Of course, we could have spent our entire trip working our way through the beer menu at Mekong Café, and still come away with only a sliver of the picture of the emerging DC/RVA beer cultures. 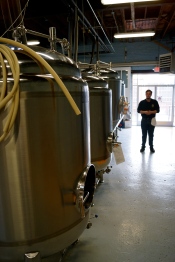 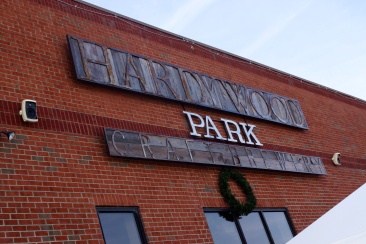 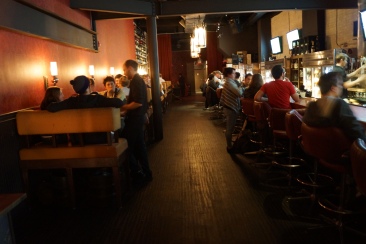 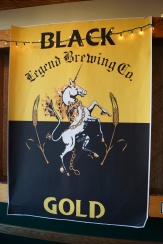 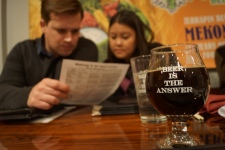 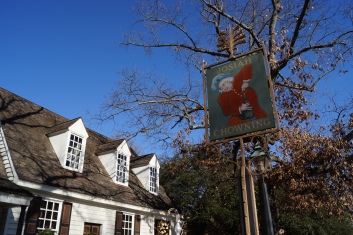 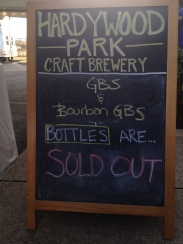 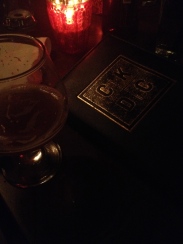 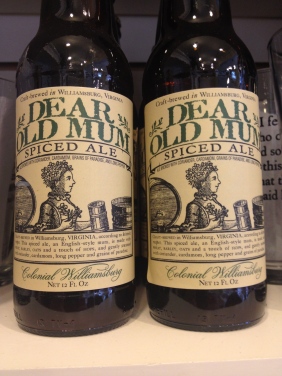 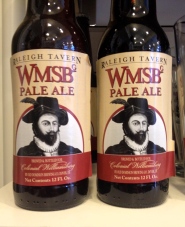 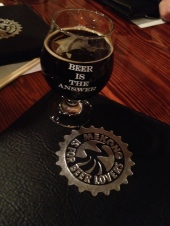 This famed Double IPA is part of  Avery’s “Dictator Series” (along with their excellent Czar, a Russian Imperial Stout that we reviewed here ), and it pours a deep gold with a frothy, eggshell white head.  Classic DIPA aromas make an impression on the nostrils even two full feet away from the glass. Upon closer olfactory inspection, Maharaja offers a very sweet nose of fruit syrup, strawberries, browned toast, and honey, an aroma that doesn’t seem like it could possibly be the prelude to a triple-digit IBU beer. The first swallow follows the lead of the nose, doling out honey-drizzled fruits like strawberry, peach, and pineapple, but ending in a wave of hop bitterness that closes on a note of spiced crackers. Maharaja is thick as tree sap and sweet as syrup, with a malt presence that is overstated for my taste, and an almost tyrannical mix of tastes that varies from spicy to sugary to full-on hop burn.

One of the underappreciated gems of the Sacramento-area beer community is the Sudwerk Dock Store and tasting room.  Many long-time Sacramentans may hold negative connotations of Sudwerk as a musty old brewpub specializing in weak and outmoded beer styles.  However, the Dock Store, which is located behind the restaurant, has become a real bastion of restless innovation in the local beer scene.  The symbiotic connection that Sudwerk forged with the UC Davis brewing program has resulted in a rapidly rotating and ever-expanding taplist, one that rewards repeat visits.

Of course, none of that would matter if the beer was bad, but Sudwerk has been turning out excellent brews of late.  Our first exposure to this new (and somewhat re-branded) Sudwerk output was at the Art of Beer event, where we were floored by a barrel-aged Flanders red ale cheekily dubbed Diddly Flanders.  That beer was not on tap when we visited the Sudwerk Dock Store a couple of weekends back, but we did get to sample an inspiring array of their brews.

Our eyes got big when we saw that the newly tapped Buffalo Theory was a dark sour beer aged in oak barrels, so we each ordered our own glass.  It’s a nice, non-puckering sour, and offers a good balance between rich and bitter flavors.  The Dock Store was also selling freshly filled bottles of Buffalo Theory, and we can report that the beer performs just as well poured as it does drawn.

After we downed the Buffalo Theory, we took a tasting tour through the rest of the taplist, which included a hearty spiced Gose, a complex and refreshing Black IPL, and a fantastically full-flavored Session IPA.  The taplist changes from day to day, and they are constantly brewing new and ambitious styles, making the Sudwerk Dock Store a mandatory stop for adventurous imbibers.

We also got to meet up with a fellow beer blogger and enthusiast Hops and Dots (aka Natalie) and her boyfriend Blake.  Check out Natalie’s blog here. 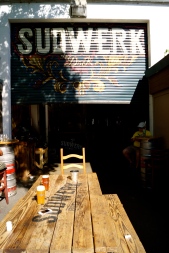