Archive for the tag “Rare Beer of the Month Club”

This “Belgian-style Amber” was brewed by Florida-based Saint Somewhere Brewing Company with their own house yeast, and open fermentation techniques were employed.  It pours an opaque chestnut brown with a cumulus cloud of a dirty blonde head.  Lecto Divina boasts a lovely nose of fruity Belgian yeast, dates, dark fruits, and tropical nuts.  Despite the quad-like color and nose, the beer is actually quite tart on the first swallow, heavy on green apples and other sour fruits.  With its peppery yeast and tongue-coating flavor, Lectio Divina is almost saison-like, and while it’s a fine beer now, Saint Somewhere expects it to mellow and ripen with age.

8.5% ABV
Purchased through the Rare Beer Club and poured into tulip glasses.

This “rum barrel aged Belgian-style ale with spices” began as a blend of two Grand Teton beers – the Bitch Creek XX Double ESB and the 2014 Coming Home quad.  The resulting blend pours a rusty, date brown with a minimal off-white head, and offers a most unusual nose, an allspice and clove spice bomb set amidst classic Belgian aromas of dark fruits and toffee.  Vintage 2014 is extremely tasty and distinct on the first swallow – a fascinating mix of holiday spices, toffee deserts, and Trappist yeast.  There are strong spices, but they remain in perfect balance, and serve as complements to the overarching flavor of toffee apples and rum-soaked fruitcake, with orange peel especially lingering on the palette.  It is similar to a hot toddy served cold, and the beer is smooth and drinkable in addition to its novel complexity.

This unusual offering from London-based brewers Meantime pours a dark, muddy amber with an almost nonexistent white head, with a thin halo of off-white foam circling the inside of the glass (we initially thought the beer was skunked).  The nose promises a tart, caramel apple-like sweetness, with crisp green apple playing off of burnt toffee and caramel aromas.  That interplay between tart and sweet is also present on the first sip, which offers much more carbonation than suggested by the flimsy head and brackish body.  Meantime Weizen Double Bock gets richer and less tart as it warms, rounding out the flavor profile with black pepper, wood, brown sugar, red apples and other red fruits, and wine tannins. 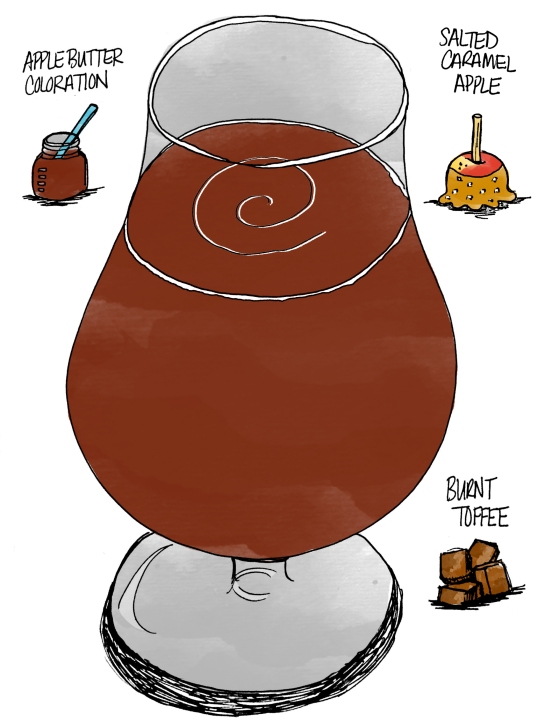